On June 14th the best motorcyclists in the world will gather together to compete at the Circuit de Catalunya. This will be one crazy race, and if you do not want to loose out on any of the details, then order your tickets today and get ready. This is also a perfect program for men traveling together to Barcelona, or maybe for father and son on a boy trip to Barcelona. Much better than shopping!

If this sounds interesting, visit the WorldTicketShop link and buy your tickets for the event today! 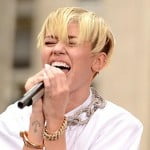 Miley Cyrus will perform on many European destinations in 2014, and in the start of May she will for example perform in Amsterdam. More than one month later, on June 13th she will come to Barcelona and then she will entertain her Spanish fans.

The Miley Cyrus event in Barcelona will be arranged on June 13th. The concert itself is supposed to start at 21.00 and the venue is the one used to welcome some of the hottest starts in our world today, the Palau Sant Jordi.

There are great expectations to the Miley Cyrus concert in Barcelona, and many people consider this to be one of the coolest concert to be arranged in Barcelona in 2014. If you want to be there, use the ticket link or more information and chance to buy tickets to this Barcelona concert.

The tourists not only come because of Sagrada Familia and the Barcelona cathedral in this period, but to listen to some of the hottest artists in the world at the moment. This is not only about music, but the Sonar festival is also about art, so one more reason to check out the event.