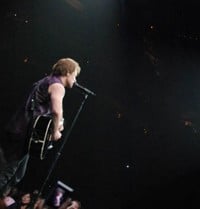 Bon Jovi will be out touring a whole lot of important European cities in 2011, for example Oslo and Vienna. The good news is that he will also visit Spain, and more accurately Barcelona. This dazzling and exiting event will take place at the Olympic Stadium in Barcelona July 27th at 20.00. If you like Bon Jovi and would like to hear and see him and the rest of the band, you better check out this Barcelona concert, as it will be hot and cool! Tickets for the Bon Jovi concert can be bought using the WorldTicketShop link further down.