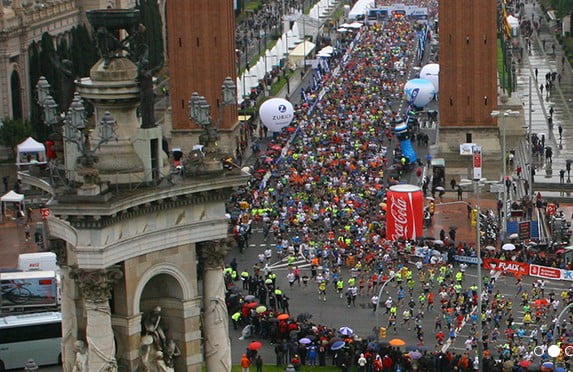 The annual Barcelona Marathon will be held again this year in the middle of March. Barcelona is the second largest city of Spain and it is also the capital city of the autonomous community of Catalonia in Spain.

Barcelona is a vibrant and colourful city which attracts countless people every year. The Barcelona Marathon or the Marathon Catalunya is one of the highlights of the city and over 17.000 runners are expected to participate in the race in 2015. It is a well organised race which connects the most spectacular sights in the city.

The route of the Barcelona Marathon leads through the most beautiful spots in the city which starts and ends at the bottom of the green hills of Montjuic Park just right at the Magic Fountain. During the race the participants can enjoy the highlights of Barcelona such as the Camp Nou which is the home of FC Barcelona, La Pederera, the Sagrada Familia as well as the Hospital de la Santa Creu i Sant Pau and many of the UNESCO World Heritage Site. This year the Barcelona Marathon will take place on 15th March and the race will start at 8.30 in the morning. If you want to attend the race make a not that the registration deadline of the marathon is on 6th March 2015.

If you want to know more on the Barcelona Marathon check this site for more information.

If you have more time and want to come back to Spain in April, then why not run the Madrid Marathon 2015 in Madrid in the end of April as well?